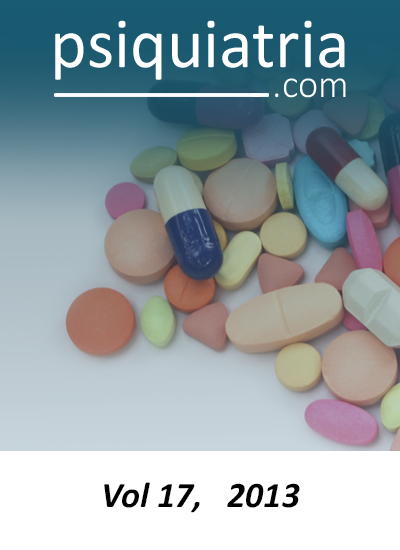 We question the belief that Behavioral Inhibition (BI) is a generalized prototypical temperamental pattern that precede and predispose to social anxiety spectrum disorders. We concentrate our look on some strategies of subordinate individuals in the competitive social context -submission and deception strategies - these take us to conceive that an excessive aggressive primary style of interactions in the social context could be the origin of a latest  secondary behavioral inhibition  in certain types of  patients with SAD. Further more in the case of an aggressive primary stile of social interaction the social inhibition would be the solution looked for the patient more than its cause.   Créditos de la imagen: Abstract Flower, por Image MD, en Flickr.

Introduction
We are going to use as guide certain observations realized in our clinical practice, an focus on
them from an evolutionary approach.
The Diagnostic and statistical Manual of Mental Health(DSM-IV Tr) [American Psychiatric
Association,2000] characterized Social Anxiety Disorder(SAD) as a persistent fear for one or
more social situations, another of the main criteria is the avoiding behaviors display for the
patients opposite this situations.
In general terms we are get used to assume that patients with SAD are less assertive and display
more interpersonal dependency style in the social interactions, this belief -that interpersonal
inhibition would be a factor of vulnerability of SAD- have acted as precursor of the concept of
the Behavioral Inhibition (BI) in SAD [Davila and Beck.2002] [Moitra et al.2008].
Behavioral inhibition (BI) is described as an early temperamental trait that can appear in the
first stages of the childhood, it would be a moderately stable temperamental characteristic
across development of the subject. The features of this shyness style would include the
tendency to show sings of fear or wariness opposite to relatively unfamiliar situations and the
tendency to avoid them, BI has been considered as a precursor that increase the proneness of
future development of anxiety disorders, more concretely of social anxiety
disorder(SAD)[Chronis-Tuscano et al.2009] [Hayward et al.2008] [Rosenbaum et al.1991]
[Biedermanet al.2001] [Essex et al.2010], although there are some authors that have pointing at
the existence of one atypical subtype of patients in which the predominant pattern would be
the risk-prone activities and aggressive interpersonal style behavoir (Kashdan et al.2009) .
The aim of this article has been favored by several clinical observations in patients diagnosed of
social anxiety spectrum disorders. One of them ­with a large trajectory as psychiatric patient replied me surprised one time I attribute him some class of behavioral inhibition: "but I'm a bad
guy" referring to his own attitude towards his work mates and the people in general. One of the
most discomforting symptoms in this patient was the facial blushing in the social interactions,
when I offered him treatment with selective inhibitors of serotonin release(SSRI) he said " no"
"they even liberate me more "-, the only drug he accepted was BZD because these didn't cause
him behavioral disinhibiting.
Another patient ­his mayor problem was his feelings of disability or even the feelings of been
critiqued in the social interaction refused to take SSRI for the same reason: "is it worst", "it
speed up at me" and I finish getting worried even more". This patient demanded a antipsychotic
depot as the only one treatment he was willing to take.
This discordant fact has carried to think us that almost in several patients the behavioral
inhibition is seem more as the solution than the problem, and had helped us to realize a little
revision of the social anxiety, more concretely about the facial and verbal emotional expressions
in the social communication; we are going to use of an evolutionary approach for trying to
clarify some about this question.

Social rank
From an evolutionary point of view the first goal of individuals is transmit their genes, social
hierarchies is a structure that appear very soon in the development of peer groups, the social
dominant individuals have a preferential access to resources and females, then is easy to

suppose that there is a bitter struggle to reach a high social rank while a determined defense of
the hierarchies is pull down for the dominant individual that monitories the subordinates
behavior in order to detect their cheating and maintain his priorities [Hendrie and
Pickles.2009]. [Cummins. 1999].
Submission has been referred as a paleomammalian defense: it would be basically a defense
opposite to dominant conspecific beings, it is a strategy that is usually used for low-rank
individuals when they has been detected in acts of cheating or deception towards the dominant
conspecific and its purpose is to ameliorate the risk of being injured by a dominant individual;
it would serve mainly to reduce the probability of conflict escalation and also to preserve social
bonds, this bonds permit to maintain cooperative relationships and potentiate the opportunities
for survival and reproduction success [Thierry et al.1990] [Schmidt and Cohn.2001] [Hecht et
al.2012].

Facial expressions
Facial expressions play a relevant part in social interactions, in non-human primates - more
concretely great apes- and humans beings, serve to transmit our social rank, moreover this
expressions are used to say to other individual about our emotional state, and also these facial
cues permit inferred our intentions favoring the approach or the avoidance behaviors : positive
emotional stimulus as looking at a smiling face facilitates our approach, nice words turn us up
more confident (Pökänen and Hietanen.2012) (Thomsen et al.2011) (Ferri et al.2010).
Summarizing: discriminate conspecific faces play an important role in social interaction, we
could call them social signals system; this would be a of low ­cost communication system and
would have a wide repertoire of gestures to remark different feelings. i.e. in non-human
primates a closed mouth bared-teeth is considered a submission signaling; in humans there are
some facial and postural sings of embarrassment and shame that serve to dismiss the effects of
negative interactions with dominant individuals as are a hunched posture, downward gaze and
avoidance eye contact, while direct eye gaze and upward heard tilt express dominance [Schmidt
and Cohn.2001] [Kelnter and Buswell.1997] [Hendrie and Pickles.2010] [Chiao et
al.2008][Seidel et al.2010].

Facial blushing
Facial blushing has been considered a human palaeomammalian submission strategy [Cantor
and Price.2007]; this submission strategy has been often associated with shyness and social
anxiety [Shuhama et al.2007]. It had been seem in experimental studies that facial blushing
provide a more kind
evaluation from de observers, would facilitate to restore the
trustworthiness after detection of a social transgression and prevent the possibility of social
exclusion- increasing the hope of a friendly future behavior in the transgressor- [ Dijk et al.2011]
[Schmidt and Cohn.2001]. Blushing also could sometimes we understood as a signal of
immaturity , modesty or incompetence in the transgressor that in the same way would tend to
produce
a
more
sympathetic
evaluation
from
the
observer
[Semin
and
Manstead.1982][Croizier.2007].
Summarizing: facial blushing would mainly serve to produce a more favorable evaluation, in fact
facial blushing could be understood as a high honest signal because is not possible to fake it.

Deception
We can make predictions that permit us to infer the possible future outcomes of our actions in
cooperative and also competitive social context, the need to achieve a high ability in the
interaction with our conspecifics in a very complex social system of relations could make us
necessary to acquire some strategies as is the deception strategy (Tactical deception, it is a term
use when a previous honest signal is used in a misleading way) [Whiten and Byrne.1988] , this
acquisition would permit us to take advantages in a competitive environment [Plasencia et
al.2011][Osvath and Karvonen.2012].
Is usual than all of us intend introduce ourselves in social field in the most favorably way having
account our predictions. The friendly facial expressions -that serve to transmit to others our best
willingness to correspond honestly in the social game- could be used sometimes as tactical
signals that would prone to a more positive response in the receiver. [Schmidt and Cohn.2001],
these signals could go from the true deception to the non-malicious unknowingly
misinformation.
We must remember that even already in the preschool years children we can see them using
intentional lies to trick others, also they come very soon to understand that there can be a
dissociation between emotions, that the internal affect is not always coincide with the external
emotion expression [Talwar and Lee.2008] [Leach et al.2004] [Abe.2011](Popliger et
al.2011)(Xu et al.2010).
The deceit strategy has been observed in humans as in non-human primates as chimpanzees,
this could be understood as a low-social ranked individuals strategy that would try to maximize
his reproductive opportunities using these tactics that facilitates reaching objectives in the
context of a hierarchical social organization [Spence et al.2004] [Cummins.1999]; this tactical
stile of communication would be linked to the growing complexity in social interactions. This
complexity would have precipitated the cortical expansion, and would be centralized in the
named neomammalian brain correspond with anatomical cerebral cortex and executive brain
functions , where prefrontal cortex would display a main role[Abe.2011][Abe.2009].

Discussion
Some authors have already recall our attention about the association in some cases of social
anxiety with higher levels of trait anger and its inadequate expression[Trew and
Alden.2009][Erwing et al.2003], even -after identified several disinhibited and impulsive
patterns of responses in social anxiety patients- propose to separate them in different
subgroups[Kashdan et al.2008 Kashdan et al.2009)].
We consider two main strategies: the first submission -phylogeneticment more ancient- and
represented in humans facial expression, mainly, facial bushing and avoidance eye gaze. The
other later strategy would require the capacity to detect others emotions and the ability to adapt
our behavior to theirs including the use of deception strategies -that comprise from franc
deception to unconscious cheating- it would be phylogeneticment more recent and
sophisticated, linked to the differential development of the cerebral cortex in great apes and
humans.

Interestingly there has been seem recently in hamsters that social defeated hamster exhibit high
pattern of submission behaviors even not only opposite the dominant individual but also
opposite toward much young and smaller opponent, individuals that not should constitute a
threat for our subject, this phenomenon has been denominated conditioned defeat and appear
also in experiences of inescapable and escapable situations [McCann and Hubman.2012].
We could hypothesize a lack of development in the ability of social complex interactions or as an
alternative a generalized conditioned defeat response in the most common type of patients with
SAD. In the atypical subgroup- high aggression expressed in social interactions ­ could be a
dysfunction of the appeasement system signals [Shuhama et al.2007], in this type of patients the
­the behavior inhibition- would often turn into the main solution, seeking this patients actively
it as an objected to achieve with their treatment.
We have very present the speculative of our hypothesis, we only tried to let out a itchy that the
clinical field has taken to us with the aim of enlarge our understanding of SAD.

Conclusion
We want expose the possibility that SAD can be conceptualized not only as a failure in the
social skills development, the pattern of inhibition behavior could be -in some casesconceptualized as a desirable attitude looked for the patient and opposite the autoperceived
excessive aggressivity.

with impairment in close relationsships?A preliminary